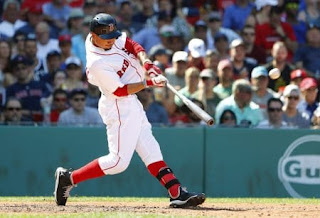 In 1994 Boston Red Sox great Ted Williams, named Steve Ferroli, the number one teacher of his world famous Science of Hitting Theory.  Click Here!
In part two of “The Truth Behind it” I said that Ted Williams respected me not only for knowing what he believed to be true in hitting but also, for expanding on parts of his theory that he had not yet thought about.  I also gave more attention to parts of the theory that needed a boost.  I used my theory on “lighting effect” as an example.

The truth of the matter is that the theory did have it share of glitches and hiccups and I am proud to have been able to smooth them out.  If I had to pick the biggest glitch it would be what I referred to in 1987 as The Stretch Position.

I think of various baseball skills as short movies and therefore you can think of those movies as having certain pictures or frames in a specific order. In hitting for just a few frames (at a key point in time) there is a very crucial and somewhat difficult move that couples the lower and upper body.  In 1980 you could barely find a player executing this move properly.  Today both leagues  are swimming all around it which is another reason for this dramatic increase in power. 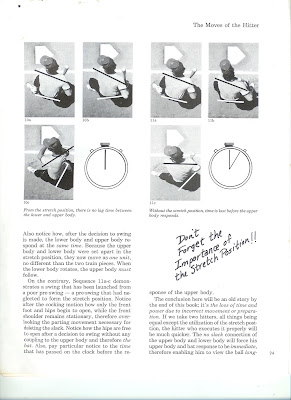 While Ted executed this move very well as a hitter himself it is not represented at all in the "Science of Hitting".  The Stretch Position is the coupling of the lower and upper body and when not present a hitter will never reach his potential. Without the stretch position the hitter is like an 8 cylinder car engine running on 4 cylinders.

Here is a page from my book; “Disciple of a Master” (How to Hit a Baseball to Your Potential) explaining the importance of The Stretch Position in 1987.  The first three pictures demonstrate The Stretch Position through a separation and therefore a coupling or link between the hips and shoulders.  The stop watch shows no loss of time between the beginning of hip rotation and the start of the bat.

The second sequence without the stretch shows time on the watch.  This time represents "wasted time" when the hips were moving before the bat started to be pulled forward.  I very rarely use the word hitch.  It is an older hitting expression that means wasted motion in the arms. Hitters with their bodies uncoupled have the worst of hitches!  It is the hall of fame hitch...

No one to my knowledge, had ever identified, documented or published this move “these key movie frames of hitting" before I did in 1987.  Without an emphasis on these frames Ted's theory was strained.

So last year, I am watching an ESPN segment on how to hit and they are talking about the separation and the stretch like it is something new!  Not once did they mention my book(s), hard work or my name.


I was listening to the game the other night and the guys were talking about Mookie Betts and they pondered over his power and changes to his approach.  Mookie executes the Stretch Position very well and ultimately gets access to all his momentum.  Which he then applies with a solid contact point. (I am also getting the idea he is very smart.)  Its not just Mookie, more and more players through out the two leagues are getting the idea, but there is a lot more to hitting then just this.  Again on an average I will give MLB hitters a 5 on a 1-10.

I had to laugh the other night when Jerry Remy referred to "the modern day hitters home run swing".   I felt like the old professor in the movie "Back to the Future".   The modern day hitters ALL NEW - old Ted Williams based home run swing... It really is funny and sad.   I had trouble finding a good size picture of Mookie at this point of the process.  The separation however is very clear. 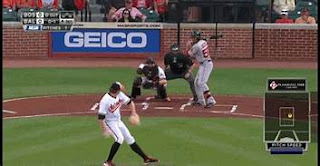 Sports Illustrated stated that Ted's theory came back into the game when Chicago Cubs, 3rd baseman, Kris Bryant was taught the theory by his father.  While I am happy for any father and their son that survive youth baseball.  I would have to disagree.


In 1988 I was a guest of Ted's at the Red Sox spring training camp in Winter Haven, Florida. One night I was out having a beer with Red Sox announcer Joe Castiglione and Red Sox pitcher Bob Stanley.  Todd Benzinger, also a player on the Red Sox at the time, was in the club and came over to join us.  Todd had seen my book and asked me about his swing.  I made some suggestions.

The next day, Todd Benzinger and his room mate Brady Anderson, covered the Winter Haven field with a very unique dead basketball drill I had designed for properly understanding  the contact point.  (They had cleared the basketball shelf at Kmart....)

My point is that Kris Bryant was born 4 years later - in 1992.  He probably would not receive any instruction until the year 2000.  I don't think Ted's theory ever really left the game.  I just think it hung around in pieces.  It was not understood or popular as mentioned in earlier blog segments and it did have some glitches.

I thought George Brett did a nice job with most of it.  Here he is in the stretch position.  But George would really be is an old timer in this resurgence conversation. 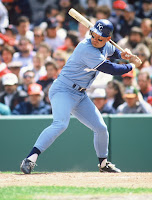 The first young player I remember doing a real good job with this move out of the "lost in space hitting era" was Brady Anderson.  In 1996 he would hit 50 home runs for the Baltimore Orioles.  If I had to pick a year/stat/player that got people really thinking about change this would be it.

I feel the Ted Williams' theory started to piece together and take more root with the publication of "Disciple of a Master" and continued to grow with "Hit Your Potential".   These books strengthened and defended the theory in a way that was very difficult to argue with.   For all SI knows, Kris Bryant's dad may have both my books.  Truthfully, I would be surprised if he does not.

A friend asked me why I was doing this blog and my hope is to work with professional baseball teams or players and donate the money to the Ted Williams League.  Kid's baseball is a @#%@^&% train wreck. I see it as a dying game. The Ted Williams League has all the answers but it needs help.

I watched a MLB show today talking about the Red Sox and Yankees playing in England next year.  They had the team owners, the players union, the MLB commissioner and all I could think about  was that kid’s baseball should be the priority.  The game of baseball is far more important than the business of baseball.


I reached out to a couple of teams / agents with players that I know I can help.  We'll see.

As for ESPN and Sports Illustrated, my intention has always been to help.  I just don't think they realize how much good it would do to bring my story into the open.  Talk some hitting with me?  Have I not earned it?

In the meantime, I have a great boys baseball camp starting soon!  Click Here.

I will end with this funny story.  I was asked by a former camper and TWL player, Greg Banks to talk about hitting at Rockland High School (Rockland, Mass).  Greg is now a JV coach there with another former camper of mine Brian Shea.  The varsity coach is Mike Doyle.  Nice program - good kids.

When it came to my introduction Greg introduced me as a coach that knows a lot about hitting and is involved in the Ted Williams League.  ( I 'm thinking - Greg you just introduced yourself...lol Then I start thinking if Williams is watching this with Cobb and Ruth, Tye just poked Ted and said; He didn't even mention you skinny and the Babe is laughing.)

Often I'll say to parents (that know my story) that their sons will be 30 before they really understand who I am --  I am officially upping that to 40.

SO TO ESPN, SPORTS ILLUSTRATED, FORMER AND FUTURE CAMPERS LET ME SAY THIS: IF GOD HIMSELF, CAME DOWN FROM HEAVEN, LOOKING FOR HELP WITH HIS HITTING, I WOULD HAVE HIM OUT OF THE SANDALS, IN A DECENT STANCE AND IN THE STRETCH POSITION BEFORE ANY OTHER BATTING INSTRUCTOR ON EARTH FINISHED PISSING THEIR PANTS FROM THE SOUND OF HIS VOICE!!!